Watched Amundsen (2019) on AmazonPrime - good standard biopic with just a bit of confusing flashback timelines. Fun, old-fashioned special effects and fine Ennio Morricone score. As always, the real-life story (at least according to Wikipedia) is much more convoluted, involved, and obsessive. But the interesting part of the wikipedia page is that in list of other media, it mentions The Red Tent(1969) movie, an Italo-Russian financed picture starring Peter Finch as Italian engineer/explorer Umberto Nobile and Sean Connery as Amundsen! Never heard of it, how could I have missed a 2-1/2 hour Connery picture? And yet, lo and behold, available to stream. 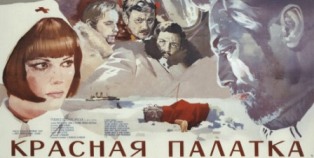 Nice, old-fashioned, big picture mess of a movie. Finch is dependably stern as Nobile but Connery is really in only 10 minutes of it. It does cover the dirigible crash in the Arctic that caused Amundsen to attempt a search mission, from which he never returned. Mostly plays out in the Arctic as the explorers try to survive and the amateur rescuers make a hash of things. (N.B. the title, though it makes literal sense once you see it, has absolutely no dramatic bearing on the story; and certainly nothing to do with the story of Jacob’s daughter ).

Also, FWIW, the 2019 Amundsen biopic shows the bitterness the Norwegian explorer felt after Robert Scott’s doomed South Pole expedition somehow turned in to national glory for England. Not a doctor, but I tend to trust the theory that scurvy was Scott’s downfall: see https://idlewords.com/2010/03/scott_and_scurvy.htm, only partially debunked by https://pubmed.ncbi.nlm.nih.gov/23734365/